During the past few weeks I have written three (3)  blog post about the “Ohio River Triple Rail Mega Site.”   This post combines those three (3) posts into one (1) post and makes for a little easier reading.  Post 3 is intentionally listed before Post 2 because . . .  well, it then makes more sense.

The most important issue relative to the “site” selection process is having an actual “site.”  ~William H. Furth

The impact of connecting with the right partner on this site is a game changer for our community. The fact that Paducah Economic Development (PED) is in a position to offer such a site is a testament to the quality of both the past and present day leadership of the public/private partnership organization (PED).

If elected, I will enthusiastically collaborate on behalf of McCracken County to make sure we are putting our best foot forward with the marketing of the “Ohio River Triple Rail Mega Site.”

By their nature, some portions of every land transaction have to remain confidential for a season. During a site selection process, the potential developer often requires confidentiality. However, the “after action review” (sorry – Army talk) is important. Sometimes simply knowing who has looked us over and picked a different location is helpful information. I believe it is helpful for the public conversation to include the identification of our community strengths and weaknesses.  That public conversation will make us stronger.

In 2016, Sentury Tire Company vetted one hundred (100) communities and building sites in fifteen (15) different states for the purpose of constructing a 1.3 million square foot facility.  The anticipated construction costs of the facility would be $530 million dollars.  The expansion would result in one thousand (1,000) new jobs with an average annual wage of $45,500.00. The anticipated electrical usage was 94 million kilowatts annually.

The Ohio River Triple Rail Mega Site made the list of top ten (10) sites. However, when the site selection committee narrowed the ten (10) sites to five (5) sites, our site was eliminated. On September 8, 2016, Sentury Tire Company announced that it had selected a site in Georgia for its expansion.

After the elimination of the Ohio River Triple Rail Mega Site from this particular competition, Paducah Economic Development (PED) authorized a study analyzing “electric utility rate competitiveness and its important role in the battle for jobs and investment.”  The content of the 28 page report is still considered somewhat confidential. A recent request (by me) for a copy of the report to be released under the Kentucky Open Records Act resulted in a response that the report is still preliminary. I anticipate the report will eventually be released in a redacted form because substantial public funds purchased the analysis and report.  In other words the information was bought and paid for by the public and the public owns the report.  The first page of the report was recently seen running around in a slightly redacted form, so I snapped a picture.  (humor)  🕵 (The author of the report is still confidential). 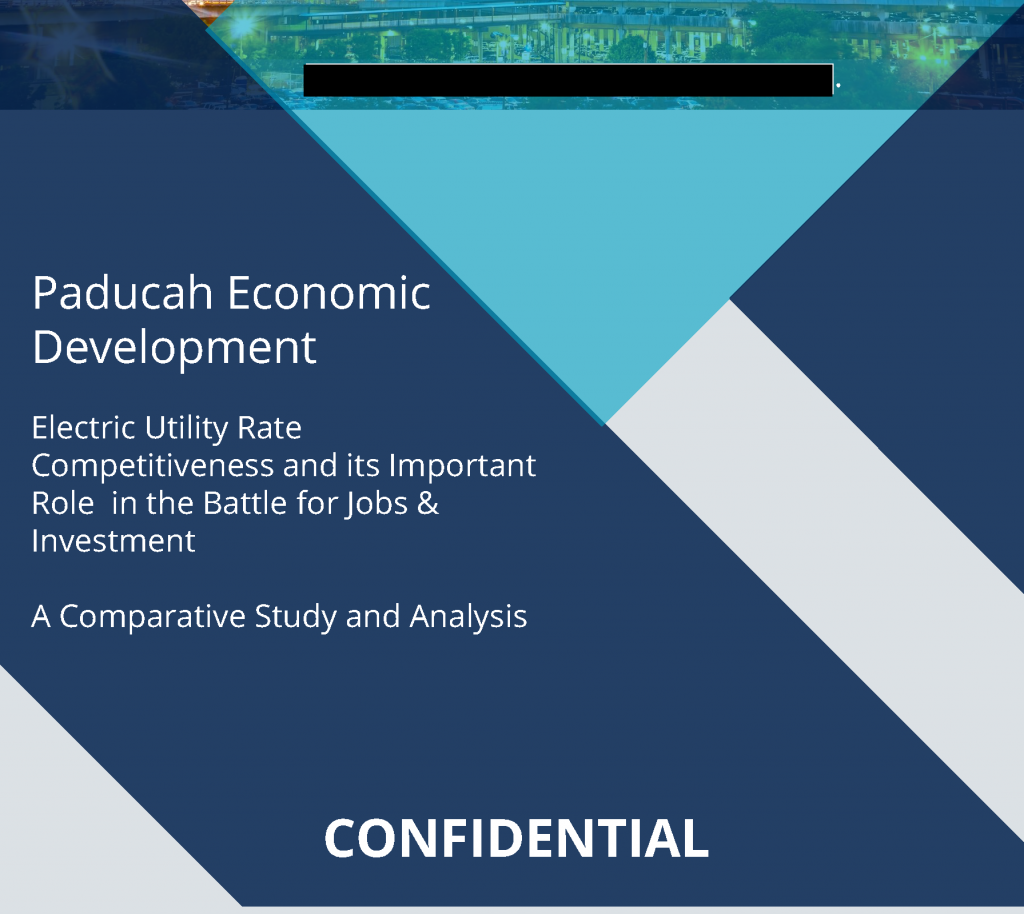 In the case of Sentury Tire Company, the cost of power was a huge component of their decision. “Out of the ten (10) communities, the power rate proposed in Paducah was the ninth (9th) highest and within a week was the highest when other community power providers submitted a new proposal.” Sentury Tire Company’s annual cost savings with the cheaper power rate was about 2 million dollars.

In my opinion, the “takeaway” from this information is two-fold. First, we should celebrate the validation of the Ohio River Triple Rail Mega Site. Our site competed well against a hundred other sites. However, the goal with economic development is to win and the second “takeaway” point is to consider ways we can make our site more competitive in the next contest for jobs. Hopefully, the transparency of both our strengths and our weaknesses will make our prospects for the future stronger.

Part 2 – Potential Paths to a More Competitive Site – The Story of Tazewell, Tennessee  (Published on October 17, 2018)

In 1968, the United States Supreme Court rendered an opinion which changed the future of a small community in Tennessee known as Tazewell. Technically, the Tazewell community is made up of two separate towns named Tazewell and New Tazewell. Apparently, the town suffers from a lack of UNESCO type creativity with regards to its naming skills. 😎 (humor). The facts of the case are NOT that exciting, but I will do my best.  I promise there is relevance in this story to our western Kentucky community and hopefully I will tie that together in my conclusion.

Background on The Tazewell, Tennessee Story

In 1933, much of the Tennessee River Valley (a region which includes most of Tennessee and areas in Kentucky, Alabama, Mississippi, Georgia, North Carolina, Virginia and Missouri) suffered from too much flooding and not enough electricity. In 1933, many back yards were adorned with an “out house.” Oil lamps provided the evening light.

In an effort to fix these rural problems, Congress enacted the Tennessee Valley Authority Act of 1933. This legislation essentially formed a huge corporation known as TVA. Over time, TVA has grown to employ about 12,000 employees. TVA owns and operates multiple sources of electrical power including approximately 29 dams and 13 power plants.

“Unless otherwise specifically authorized by Act of Congress the Corporation (TVA) shall make no contracts for the sale or delivery of power which would have the effect of making the corporation or its distributors, directly or indirectly, a source of power supply outside the area for which the Corporation or its distributors were the primary source of power on July 1, 1957: And such additional area extending not more than five miles around the periphery of such area as may be necessary to care for the growth of the corporation and its distributors within said area. . . .”  16 U.S.C. section 831n—4.

In 1968, ten (10) years after Congress limited TVA’s distribution area, the leadership of Tazewell, Tennessee was upset with their high power rates. Their little town of 2,000 was paying an electric rate two and a half (2 ½) times that of the customers located in their county and not inside their city limits. The county enjoyed the lower TVA power rates, but the city was shackled with buying power from a privately owned power company via the local power co-operative. The political leaders of Tazewell, Tennessee went directly to TVA for the purpose of negotiating lower power rates for their town.

The local power co-operative and the private utility companies who were charging the high rates adamantly opposed the political leadership’s effort to substitute their high power rates with the low power rates of TVA and asserted the 1959 Amendments to the TVA Act prohibited TVA from selling power to the residents of Tazewell, Tennessee. A lawsuit resulted and in 1968, Supreme Court Justice Hugo Black (an FDR appointee) issued an opinion for the majority of the Supreme Court which defended the actions of the town’s political leaders and affirmed their rights to seek power from TVA because the area of Tazewell, Tennessee fit in the defined areas that TVA could still sell power.

MORALS OF THE STORY

Our community enjoys quality and added democracy in public servants who serve on either public utility boards or the boards of utility cooperatives (organizations owned by the consumers/members). I feel certain a collaborative approach to maximize the marketing effort of this site is on the horizon. The ancillary and positive effects of a “win” with this site are tremendous. If chosen to serve on the McCracken County Commission, I hope to help in that collaborative effort.