Bumps in the Road(s): The Jefferson/Broadway Conversion Question

I attended the Paducah Commission Meeting Tuesday during which the commission approved the contract for a study with HDR Engineering for engineering/design services on what the city is calling the “Broadway/Jefferson Project”. Much was said at the meeting by several citizens in attendance. Some were opposed to what is, arguably, the most controversial point of the study which is the question of whether to convert Broadway and Jefferson in the downtown back to two-way traffic.

The majority of push-back on the two-way conversion question understandably came from Paducans living or working in the downtown. Most are worried that, because downtown Broadway is difficult to navigate when semis, UPS, or Fed-Ex trucks are making deliveries, the situation would become impossible if Broadway was two-way. How would cars navigate around delivery trucks or those who are parallel parking?

I, too, am a business owner in downtown Paducah and I think we can all agree that these concerns are certainly legitimate.

I think it’s also safe to say the word of the evening Tuesday night was “counter-intuitive”.

Because it is counter-intuitive to think a two-way conversion can help downtown thrive. Here’s what Jeff Speck, the expert who visited Paducah in 2014 and on whose recommendation the study has been commissioned, has to say in his book, “Walkable City”:

[faster and more aggressive] driving, principally because they distribute vitality unevenly, and often in unexpected ways. They have been known to kill stores consigned to the morning path to work, since people do most of their shopping on the evening path home. They also increase a situation in which half the stores on cross-streets lose their retail visibility, being located over the shoulders of passing drivers. They intimidate out-of-towners, who are afraid of becoming lost, and they frustrate locals, who are annoyed by all the circular motions and additional traffic lights they must pass through to reach their destinations. (Walkable City: How Downtown Can Save America, One Step at a Time, Farrar Straus Giroux, 2012, pp. 179)

Speck cites the experience of Savannah, Georgia, which lost 2/3 of taxpaying addresses along East Broad Street after it was converted to one-way in 1969, but regained most of them after it was converted back to two-way (2012: 180). At the meeting Tuesday, Bike World owner, Martha Emmons cited the experience of Vancouver, Washington, a city that converted their downtown thoroughfare to two-way during the recession in 2008. According to Governing magazine,

In the midst of a severe recession, Main Street in Vancouver seemed to come back to life almost overnight.

And we aren’t the only Kentucky city struggling with this question. Louisville voted in April of this year to fund a study similar to ours on the conversion of “key roadways in and near downtown”. The Louisville study is scheduled to be complete in late 2017. And Louisville, I would add, is a city undergoing a renaissance.

Besides the conversion (and also potentially independent of the conversion), there is much to be gained from the study in terms of bikeable/walkable urban trails. An extension of the Greenway Trail would complete a loop that would begin to include neighborhoods. According to the city’s website, the study will address the following issues:

Also from the city’s website, here’s a look at how bike lanes might be incorporated on Broadway and Jefferson: 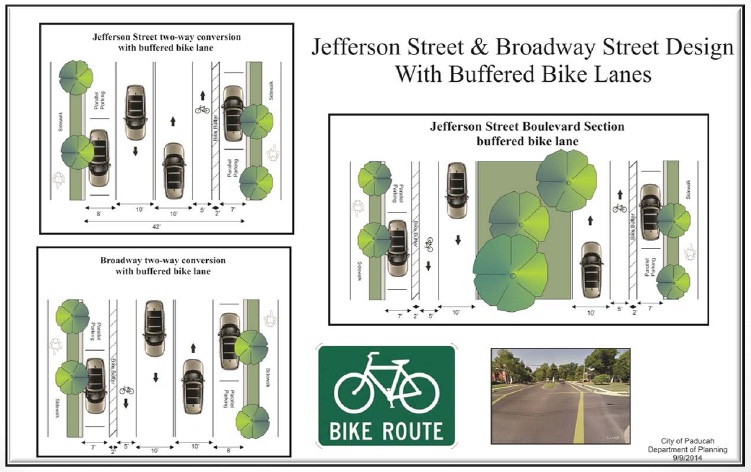 Am I prepared to offer my unequivocal support to the conversion? Not at this time – those who have invested in downtown deserve a good quality process that truly listens to their concerns.  But I do support being thoughtful and thorough and taking a deeper look, up to and including considering options that may seem counter-intuitive. I support asking the question and completing the study which will give us a whole lot more good information on which to base a decision. And I applaud the city for following through with the Speck recommendations.  In fairness, Speck was only in our town for a few hours and we are here every day.  Our geography may be different from the other success stories.  The Study will help us analyze the issue as a community.  Regardless of the street conversion issue, the great take away is that the City is talking and thinking Bikeable Walkable.  Because of the FAST Act grants which will be awarded in the next 4 years (52 million over the next 4 years)  our City needs to develop good quality plans to support theses grant applications.  So  . . . we need a constant conversation about “What comes next?”